What Does Smite Do in Minecraft

In this Minecraft tutorial, you’ll learn what does Smite does in Minecraft enchantment with step-by-step instructions. The Smite enchantment is especially useful for increasing damage in Minecraft, where enchantments elevate weapons to new levels. Minecraft offers a variety of ways for players to become stronger including crafting new weapons and armor, brewing potions, and enchanting items. Especially enchanting can allow players to specialize against certain types of threats, and can be extremely useful for players who understand their goals in advance. This is the case with the Smite enchantment, as it is very specific, but very powerful when used in that way. It’s not hard to put high-level Smite enchantments on weapons, so players who are wondering what they do and how they do it need not worry. 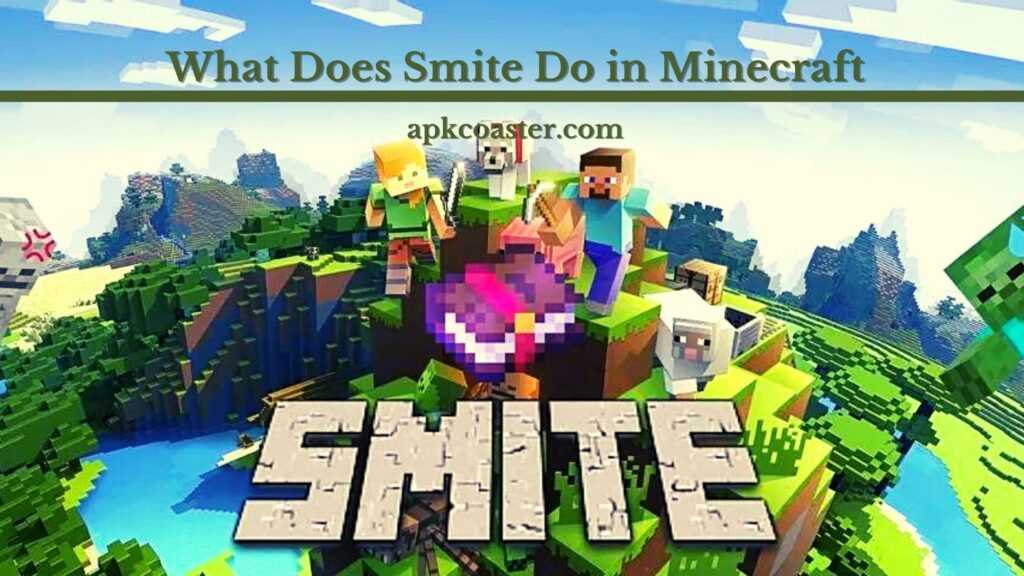 A player must obtain an enchanting table before engaging in any enchanting. This item is crafted using four Obsidian, two Diamonds, and a Book in Minecraft. The enchanting table should be surrounded by bookshelves so that it can produce more enchantments. To be effective, Smite must be applied to swords or axes. Smite upgrades a weapon’s damage by 2.5 (or 1.25 hearts) when attacked by an undead mob, but this damage does not apply to other weapons. Since there are quite a few of these in Minecraft, it’s usually not a bad tradeoff. Due to the Sharpness enchantment, Smite does quite a bit more damage against the undead than Smite does with the undead, which makes it even more effective. Zombie villagers, skeleton horses, zombie horses, strays, husks, drowned, phantoms and zoglins will all be affected by this enchantment.

What is Smite in Minecraft?

There is not much to the Smite enchantment other than the fact that it serves as a buff for the damage dealt. A more accurate description is that smite inflicts more damage on undead mobs. A sword or ax cannot be enchanted with smite enchantment until it reaches stage five. The damage increases every time you advance by 2.5 after the first stage, which can be fatal. It can be easy to forget which undead mobs are considered undead while playing Minecraft. Listed below are some undead mobs in Minecraft:

How to Use Smite in Minecraft

A sword or an ax can be enchanted with smite using an enchantment table. A player will need 4 blocks of obsidian, 2 diamonds, and a book to create an enchanting table in Minecraft. As you level up, you will be able to get better enchantments, so you may find lower-level attachments earlier. You can also improve your enchantments by placing a bookstore next to an enchanting table with one block of buffer space in between. To reach the best delights, you need to build a total of 15 complete bookshelf boundaries.

How to get Smite in Minecraft?

Minecraft players can obtain Smite through enchanted books that can be obtained through crafting, fishing, looting dungeons, and trading. The first thing you need to get enchanting books, books, and lapis lazuli is an enchanting table. Those items must then be made, obtained, and placed around the enchanting table with 15 bookcases placed in an area that is one block away from the table. You will also need to keep enchanting books until the enchantment you desire shows up, which will increase your chances of getting more powerful enchantments.

There is also the option to use an enchanted fishing pole in addition to these options. You will need to enchant a fishing pole with the luck of the sea to use the enchanted fishing pole option. In this way, you will have a higher chance of finding enchanted books while fishing. As a follow-up, you can either trade emeralds for books or loot dungeons. Overall, both options are decent but shouldn’t be relied upon because they are the least likely to work in the game.

How to enchant a weapon with Smite?

Smite enchantment can be added to an ax or sword using an enchanting table, game command, or anvil. To be able to use the enchanted weapon against undead mobs, you will need to hold it in your hand. Enchantment for Smite is available on all platforms.

Which items can be enchanted using Smite?

What Does Smite Do in Minecraft PC, Pe, Xbox, PS4

It is possible to maximize the effect of Minecraft’s Smite enchantment by attacking zombies, skeletons, pigs, and withers. As a result of the infection, your iron sword or ax gains the power to fight the evils. Characters are enchanted by the game developers. Knocking them out will be an intense experience. In addition, enchantment has five levels. The power of destroying rises so quickly at smite enchantment level 5. That’s why it’s so important in the game. The more experience a player gets in Minecraft, the more he wants to boost his level. Enchantments give the player such an opportunity to move to the next stage.

Procedure to Apply Smite in Minecraft

Smite can only be applied if you have efficient mining; otherwise, an alternative method is available. An enchantment table will be created for smite. For that purpose, you should place a book with blocks of obsidian and two diamonds on the table. After that, you should build shelves around the table. These shelves will set the game at a high level. To jump to level 30, you need to develop 15 bookshelves around the table. Once players reach that level, they can apply to gain XP, and all levels can be found anywhere in the world. Additionally, you should aim for the more advanced level as soon as you reach Smite Enchantment. After the upgrade, you develop the weapon, and the mobs increase in number. Do you want to know what Smite does in Minecraft? It is necessary to use the smite enchantment to boost yourself. Furthermore, you must pay to level up your sword in Minecraft and to obtain Lapis Lazuli. Smite V will be obtained if the player is successful in establishing bookshelves around the table.

Only the Lapis Lazuli on the previous level are available as choices, as shown on the table. Options vary according to how many classes are required to enchant sets randomly. To obtain a certain enchantment, click on the tool.

Difference Between Smite And Sharpness

Sword Sharpness is another useful command. With five levels, it’s very similar to Smite, and the fifth is the most important. Smite and Sharpness are both vital, but they are not compatible. You cannot have both at the same time. The two of them show up in specific circumstances depending on the style of play of the player. Sharpness is more popular than Smite due to its ability to kill mobs in two to three hits. When the crowd is enchanted with Sharpness, 1 128 hearts are damaged. Nothing else changes. We already know how damaging Smite is. Here’s what Sharpness does to mobs.

According to the discussion above, smites have a lot more power than Sharpness. Nevertheless, Semites are only used for creatures. In the end, the Smite is the best weapon to fight mobs. The power reaches 12.5. Yet enchantments for diamond swords require Sharpness.

Smite, Sharpness, and Arthropods Bane do not need to be applied to sword enchantments in Minecraft.

Is Smite 4 good in Minecraft?

Based on the above table, Smite 4 is an extremely good spell that can deal lethal damage to undead mobs.

How good is smite 5?

When fully powered up to level V, Smite can add a whopping 12.5 damage to any weapon, regardless of its base damage, but only for enemies of the undead variety, such as Skeletons, Zombies, Drowned, and Withers.

Can you put smite on a bow?

Neither a sword nor an ax can be enchanted with the Smite enchantment.

Not at all. Smite can only be applied to skeletons, withered skeletons, zombies, zombie pigmen, drowned, and the Wither boss. The Enderman won’t receive additional damage points since it isn’t classified as an undead mob.

Does smite 5 have one-shot zombies?

As long as Diamond axes are used with Smite V, zombies and skeletons can be one-shot with it.

With the aid of an Enchanting Table, you can bestow powerful enchantments upon your equipment. Weapons, tools, and armor can all be enchanted and knowing which ones do what is the key to success. Thanks for reading our blog on what Smite does in Minecraft PE. We hope you have no more confusion about the game if you have followed the blog. In addition, you will learn the main aspects of the game you didn’t know before reading our blog.