When did Minecraft come out? Everything you need to know

In this article, you find when did Minecraft come out and everything you need to know about Minecraft. Minecraft, developed by former King developer Markus “Notch” Persson and Swedish studio Mojang, has experienced a meteoric rise to success in the video game industry. According to the latest figures, Minecraft has sold more than 200 million copies across all gaming platforms, making it the best-selling video game of all time and the 9th best-selling franchise of all time. With over 500 million active players worldwide, Minecraft has 126 million monthly active players. 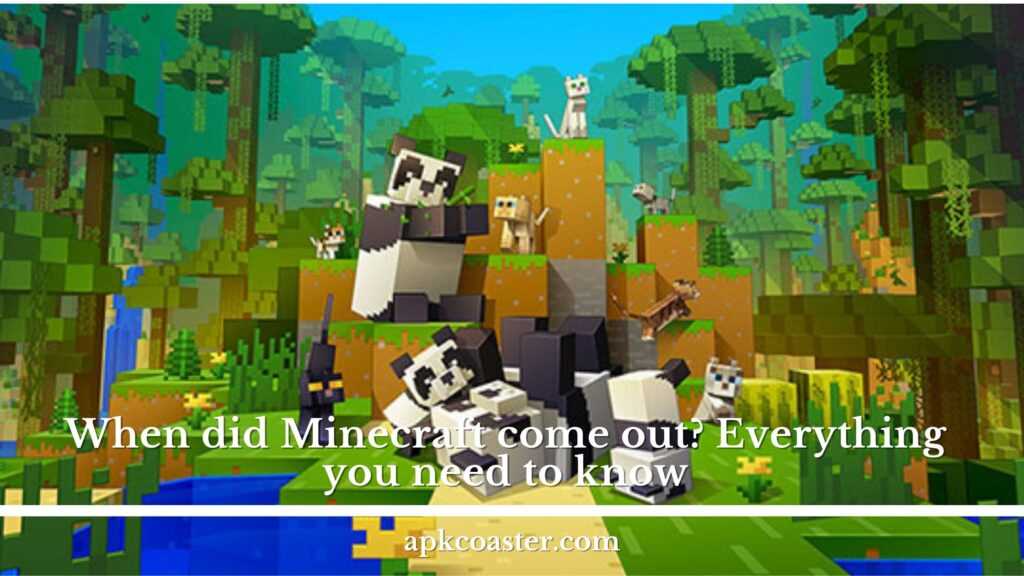 Updates and spin-offs of the Minecraft franchise have allowed Mojang to continue to maintain the game’s popularity. All of the versions of Minecraft have been listed below. Microsoft announced on 15 September 2014 that it will purchase Mojang for $2.5 billion, which includes all Minecraft intellectual property. There are some players who are curious to learn more about the game, but most players don’t show any interest in learning about it. In addition to keeping them up-to-date, it can also provide them with unique features and elements they didn’t know about before. Staying connected and up to date about something is important because it can help you keep up with the game. Take advantage of the game by being active enough to easily gain huge advantages.

Alpha and beta versions of Minecraft and its full release

The first build of Minecraft running on the Java platform was released on May 17, 2009. As a result of user feedback, the alpha version of the game will be released on June 30, 2010. In response to the growth of Minecraft’s alpha version, Notch left his day job and worked full-time on the game. Notch’s gamble would pay off, and he released new blocks and the now-popular Survival Mode as a result of Notch’s updates. With sales proceeds from the alpha, Notch founded Mojang to support Minecraft’s development. The game entered beta on December 20, 2010, and Notch explained that future content updates and updates would remain free. The full version of Minecraft, which was released on November 18, 2011, after less than a year of development, emerged from its beta phase. The lead designer of Minecraft, Jens “Jeb” Bergensten, a former co-developer passed creative control of the game to him a few weeks later.

The popularity of Minecraft soared. Minecraft’s intellectual property was very appealing to Microsoft (among many other video game giants such as Blizzard and Electronic Arts) by 2014. In 2007, Microsoft purchased Mojang and the game’s IP from Mojang Minecraft was bought by corporate interest in September 2014 after Notch suggested it. The reason why this is being discussed is that Notch has been criticized in the past regarding the End User License Agreement (EULA) and the rules for online multiplayer servers. Notch was put on Forbes’ billionaire’s list immediately after his acquisition of Mojang for $2.5 billion. Notch left Mojang following this acquisition and left Jeb in charge of the company and the game’s new era under Microsoft.

With dedicated and consistent content updates, new versions across a variety of platforms, and extensive marketing and merchandising, Minecraft’s popularity has only grown. Super Smash Bros. even features Steve, the protagonist in Minecraft. Nintendo Switch version only. After starting as a hobby project, Minecraft quickly became one of the most successful and popular video games of all time. Its simplicity is appreciated by players of all ages, but it’s also known for its in-depth mechanics and nuances. For a very long time, Minecraft’s popularity is unlikely to wane, and its dedicated player base is thrilled about that.

Minecraft Games come in several varieties. Check out the following versions and when was it released?

Markus ‘Notch’ developed the original Minecraft in May 2009. You can play it for free in your browser now. No updates have been released for the game, so all bugs and glitches remain.

Among the best-selling Minecraft, games have been Minecraft: Pocket Edition. It was originally available only for Xperia PLAY.

The most popular version today is Minecraft: Java Edition, which was released in 2011.

First released on the Xbox 360, Minecraft was developed by 4J Studios. The PlayStation 3 version of the game was released on December 17, 2013.

In later releases, such as those for the PlayStation 4 and Xbox One, Minecraft became available on next-generation consoles.

Players in this version were able to edit the game world, using commands. It was similar to the Pocket Edition, but it was new. Through Python programming, players could modify the Minecraft world with the game code. We have included a list of Minecraft Color Codes, which you can use as a guide for changing text color in chat, and more.

Minecraft Realms were announced by Mojang in 2013. This is a service that hosts multi-player games on servers so that players don’t have to set up their own servers. A Realms server can only be joined by invited players, and IP addresses are not used. An update to Realms was released by Mojang on the 31st of July 2017, allowing cross-platform play.

Following Microsoft’s acquisition of Mojang in 2014, the new Bedrock engine used in the Pocket Edition was added to versions for Windows 10, Xbox One, PlayStation 4, Nintendo Switch, and Apple TV.

A story-based adventure game by Telltale Games was released with Minecraft. An episode first aired on October 13, 2015.

In the winter of 2015, the Wii U version of the game was released.

With the help of the Samsung Gear VR, this version of the game has been adapted from Minecraft: Pocket Edition.

Mojang collaborated with NetEase to ensure a smooth release of the Pocket Edition and Java in China.

Players in Minecraft Earth visit real-life locations to construct and collect materials for the game, which is an augmented reality game for mobile devices.

There is a spin-off game for Minecraft called Minecraft: Dungeons. In contrast to Minecraft, Minecraft Dungeons lacks an open world, mining, or building capabilities. A dungeon crawler game in the hack & slash style.

Mid-2021 is the date for Minecraft 1.17. With Caves & Cliffs, Java Edition receives a major update, and the update is scheduled for release in mid-2021. During Minecraft Live 2020, the update was announced.

The release date for Minecraft 1.18 is December 31, 2021. The Cave Update, also known as Minecraft Bedrock Edition 1.18, is a major update for the game.

It is scheduled for April 26th, 2023, for Minecraft 1.19 to be released. It is called the Kinects update or Weather n’ Nature update because it is centered around weather and nature. More weather will be added, the swamp biome will be updated, and more.

I think Minecraft 1.8 has the most bugs, but it’s still the best version. Players simply “stuck” with 1.8 due to its enjoyable PvP aspect, the high level of servers that started with it, and how popular it got.

What was the 1.8 update for Minecraft?

The Bountiful Update 1.8, released on September 2, 2014, was a major update for Minecraft: Java Edition. With the newly added Spectator Mode, map makers are now able to create adventure maps.

Did they ever make a Minecraft 2?

Minecraft 2 will be released on what date? We don’t have a release date for Minecraft 2, maybe never. If our snouts find anything, you’ll find it completely here. Mojang will launch Minecraft: Dungeons on May 26, 2020, its third-person dungeon crawler RPG.

In mid-2021, Java Edition will receive its first major update in the Caves & Cliffs update. Minecraft Live 2020 released the news on October 3, 2020.

In addition to lush caves filled with life, dripstone caves filled with stalactites and stalagmites will be available as new biomes. Variation is key when it comes to caves. Although Caves & Cliffs Update will have a classic feel, there should be something for everyone. The update will also include many new mobs.

How do you install Minecraft 1.16 screenshots?

Activate snapshots in the “Installations” tab of the Minecraft Launcher to install the snapshot. Snapshots can corrupt your world, so you should back them up and/or run them in a different folder than your main world.

How do you get Netherite armor?

You will need a Smithing Table to convert Diamond armor into Netherite armor. Alternatively, they can spawn in villages or be crafted by placing two iron ingots over a 2×2 square of wooden planks. Grab a Netherite Ingot and combine it with it once you’ve got one.

When it comes out, you will be able to know all about Minecraft if you consider the information provided above. As well as helping you to learn more about the game, it can also help you to explore new aspects of it. So that you can have the best experience and play the game safely, you should try to get all the information about the game.